TORONTO, Canada – November 7, 2018 – Against The Grain Theatre, Toronto’s visionary chamber opera company, is known for electric performances that act as “a bracing wake-up call to the spirit” (The Globe and Mail). That daring candor is now being channeled via its new in-house recording label, which launches with a live recording of Osvaldo Golijov’s “ecstatically beautiful…radical and disorienting” song cycle Ayre this December (The New Yorker).

Khalil, a Lebanese Christian raised in Damascus, Syria, until her family immigrated to Canada, was immediately drawn to the eclectic textures and melodies of Ayre.

“When I first heard Ayre, I was mesmerized. I recognized two of the pieces as songs I had sung since childhood – songs my mother and father taught me,” said Khalil. “With all the anti-Arab propaganda on the news, it was very moving to hear holy music from Arabic culture framed so beautifully, enveloped with real respect by Hebrew and Christian traditions.”

To those distressed by endless media reports highlighting the rise of nationalistic movements across the globe, Ayre’s reverence for seemingly conflicting cultures can act as an injection of hope. It offers us a glimpse of shared humanity – of the ties we can more easily perceive through music, poetry, and common experience. As The Globe and Mail has recognized, Ayre is “an evening of power and resonance, the kind of which deep memories are made.”

The composer, a 2003 MacArthur Fellow, believes that Ayre’s resonance is heightened by Khalil’s performance – including her ability to deliver the texts in their original Arabic, rather than in English translation.

“No one owns this piece in the way that Miriam Khalil does,” said Golijov. “It is as if she was born to sing it.”

Critics from Ottawa to Buenos Aires have praised Khalil’s interpretation of Ayre as a powerful and visceral reminder that humanity has the capacity to transcend the cultural barriers that seem to accost us daily. Golijov’s conscious weaving of linguistic and musical threads represents a more accepting form of cultural pluralism, where historically competing traditions can coexist, complementing each other more beautifully than an assimilated society might anticipate.

According to Against the Grain Founder and Artistic Director Joel Ivany, the preservation of such transformative works was a major motivator in the establishment of the theatre’s in-house label. “At AtG, we have made it our mandate to create fresh and daring experiences for our audiences – and with this new facet of our work, we’re now able to capture and share moments of our acclaimed limited production runs.”

“Against the Grain is thrilled to be able to share the immediacy and emotion of this live performance, recorded at the breathtaking Ismaili Center in Toronto, with a broader audience,” he said. “Ayre is an extraordinary and unforgettable adventure.” 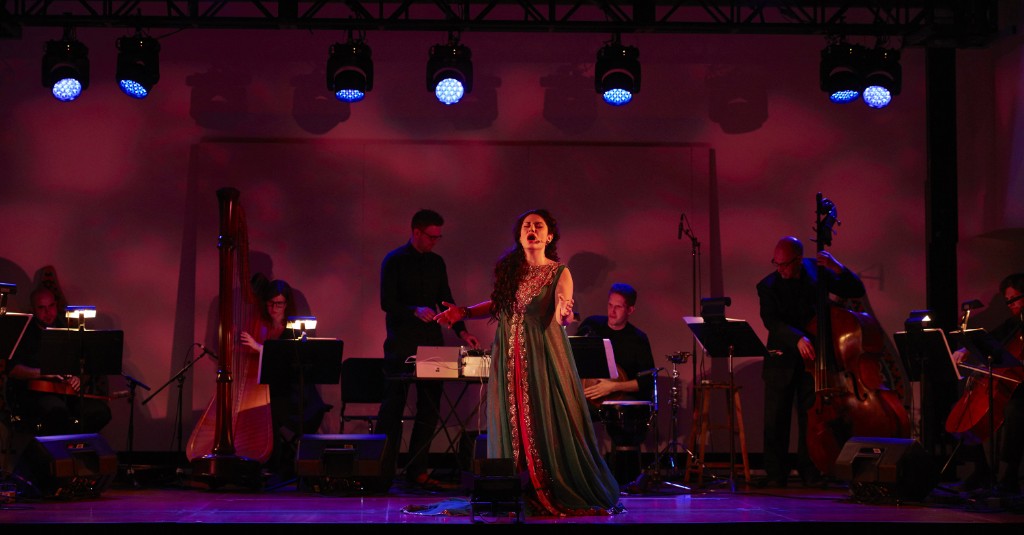 Osvaldo Golijov is a composer who blends classical forms with the rhythms and melodies of other genres to create a concert experience that resonates deeply with contemporary audiences. Drawing on diverse musical and literary traditions (from tango and klezmer to the poems of Emily Dickinson and Pablo Neruda), Golijov’s compositions exhibit a fresh, powerful style. Among Osvaldo Golijov’s best known works are the St Mark Passion; the opera Ainadamar; a cello concerto, Azul, and the song cycle Ayre. He has also written soundtracks for films by Francis Ford Coppola (Tetro, Youth Without Youth), and arranged music from many places in the world, primarily for the Kronos Quartet. He is currently working on Falling Out of Time, a song cycle for the Silk Road Ensemble, based on a book by David Grossman. He was born in Argentina in 1960, lived in Jerusalem in his youth, and moved to Massachusetts in 1991, where he is the Loyola Professor of Music at the College of the Holy Cross.